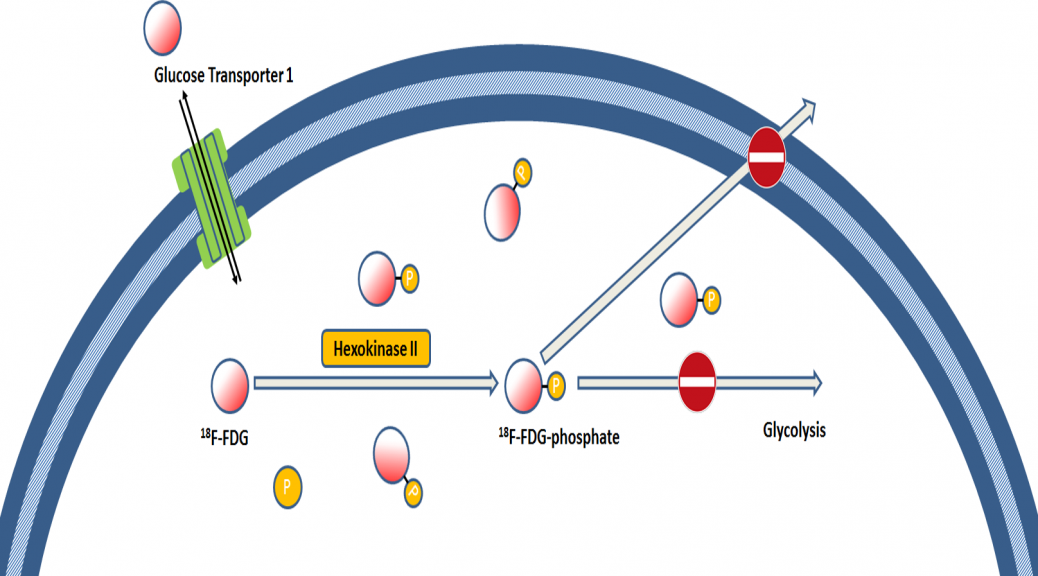 Cancer cells carry out much more glycolysis than other tissues in the body, a phenomena that has been known since the 1930s (the ‘Warburg effect’). Imaging levels of glycolysis in the body thus provides a way to detect cancer tissue. Glucose can be radiolabelled directly using 11C, however images would be complex to analyse as the radiotracer would be metabolised. In the 1970s, pioneering research demonstrated that an analogue of glucose that incorporated fluorine was incompletely metabolised and so could be used as a surrogate for glycolysis. This tracer, 18F-Fluordeoxyglucose of 18F-FDG, is the mainstay of PET imaging in the UK today. 18F-FDG is injected into the blood, and is taken up by cells via the Glucose transporter. Once inside, it is phosphorylated by hexokinase (the first step of glycolysis) but can’t be metabolised further; as the phosphorylated form cannot cross the cell membrane it then accumulates (if the cell lacks the ability to dephosphorylate it). Cells that carry out high levels of glycolysis then accumulate tracer, and this is the basis for the contrast seen with cancer cells.